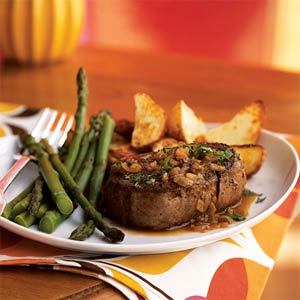 Preheat skillet till very hot, add butter and sear filets quickly on both sides, 4 filets at a time.

After filets are seared, remove from skillet, set them aside.

Add the other half of butter to the skillet, and saute shallots and mushrooms until light brown.

Put filets, which were set aside, back into skillet and flame them with Brandy.

Deglaze with Marsala and red wine.

Remove filets from skillet and set aside.

Add demi glace to skillet with mushroom & wine mixture, and reduce by one third.

Add filets to the skillet and turn several times, while cooking to your liking.

Remove filets from the sauce and keep warm.

Finish the sauce with heavy cream and check for seasoning. The Diana of Versailles

Set up filets on hot plates (2 filets per person) and top with Diane sauce.

Serve vegetables and fettuccine or rice Pilaf on the side.

Diane, the Roman goddess of nature (hunting), fertility and childbirth.

Diana is also a moon goddess.

Torch bearing processions were held in her honor.

Under Greek influence she was equated with Artemis and assumed many of her aspects.

Her name is possibly derived from “diviana” (“the shining one”)

She is portrayed as huntress accompanied by a deer.