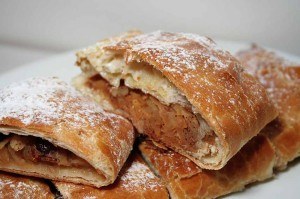 Apfelstrudel is commonly referred to today as apple strudel.Â  The dough used to make strudel is similar to the flaky texture of baklava, a popular pastry from the Ottoman Empire during the late 18th century.Â  The dough used to make baklava is very similar to phyllo dough that got its name from the Greek word â€œleafâ€.Â  Rudi Lechners Restaurant takes pride in makingÂ traditional German cuisine.

Apfelstrudel was made popular through the Habsburg Empire in the 18th century.Â  Austrian cuisine was formed during this time and has been influenced by many cuisines such as Bosnian, Hungarian, Polish and Slovakian to name a few.Â  Apple strudel is the most commonly known kind of strudel in these cuisines although it can also be made with just about any kind of fruit.Â  Apfelstrudel is considered the national dish in Austria.

A handwritten recipe dating back to 1696 is the oldest known recipe and is housed at the Wiener Stadtbibliothek, the official library of the City and State of Vienna, the capital of Austria.Â  Rudi Lechners Restaurant proudly serves this traditional German desert

This delectable pastry consists of a filling of tart crisp apples, sugar, cinnamon, raisins, and walnuts.Â  The traditional preparation of the dough is a difficult process.Â  It is kneaded and stretched very thin until it is almost transparent similar to phyllo dough.

The Hungarians and the Viennese improvised on this dough and perfected the strudel.Â  The filling wrapped inside this dough and baked to form this delicate, flaky dessert.Â  It is served as warm slices topped with powdered sugar or icing.Â  At Rudi Lechners Restaurant,Â  every effort is made to create this pastry in the traditional German way.

This traditional Viennese style pastry is substantial, rich and delicious.Â  The combination of sweet which is complimented by the slight spiciness of cinnamon along with the delicate pastry is sure to please the palate.Â  We invite you to try our Apfelstrudel after one of our many delectable German specialties as the finishing touch to your dining experience at Rudi Lechners Restaurant.Â Â  Guten appetite!