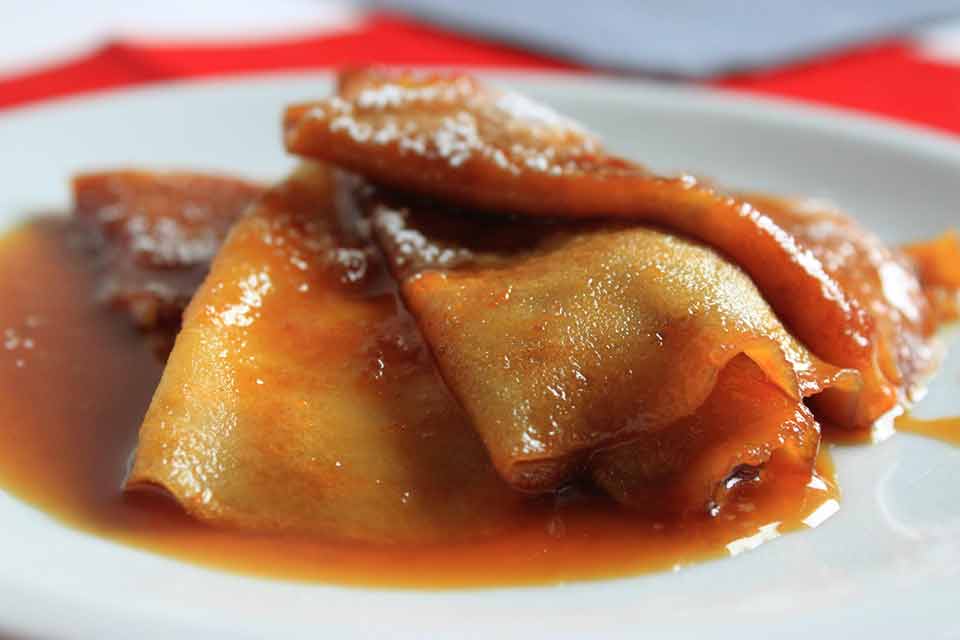 Crepes Suzette was actually created out of a mistake in 1895 at the Maitre at Monte Carlo’s Cafe de Paris. He was preparing a dish for the Prince of Wales, the future King Edward VII (1841 – 1910) of England.

Heat sugar with lemon peels in hot 12″ skillet over gas flame till sugar is caramelized. Add butter, swing and tilt skillet till butter is melted, squeeze the orange into, and cook it up till caramel is dissolved in juice.
Add Grand Marnier and Cointreau, fold the crepes in quarter, and put them into skillet.
Simmer crepes and turn them, so they absorb the liquid, and flame them with the brandy.
Serve 2 crepes per person on hot plate and top with sauce

According to Henri Charpentier (then 15 years old), in his own words from: “Life a la Henri – Being the Memories of Henri Charpentier:”It was quite an accident as I worked in front of a chafing dish that the cordials caught fire. I thought I was ruined. The Prince and his friends were waiting. How could I begin all over?Â I tasted it. It was, I thought, the most delicious melody of sweet flavors I had ever tasted.I still think so. That accident of the flame was precisely what was needed to bring all those various instruments into one harmony of taste…

He ate the pancakes with a fork; but he used a spoon to capture the remaining syrup. He asked me the name of that which he had eaten with so much relish. I told him it was to be called crepes Princess.

He recognized that the pancake controlledÂ the gender and that this was a compliment designed for him; but he protested with mock ferocity that there was a lady present. She was alert and rose to her feet and holding her little shirt wide with her hand she made him a curtsy.

“Will you,” said his Majesty, “change Crepes Princess to Crepes Suzette?” Thus was born and baptized this confection, one taste of which, I really believe, would reform a cannibal into a civilized gentleman.

The next day I received a present from the Prince, a jeweled ring, a panama hat and a cane.”