Eintopf is traditional German stew similar to Irish stew. The name Eintopf means â€œone potâ€ deriving from the way it is cooked rather than an actual recipe. The Kassel area (spelled Cassel until 1928) is a town on the Fulda River in northern Hesse, Germany that makes their own version such as lumpen und fleeh which translates into â€œrags and fleasâ€, generally meaning whatever unused ingredients that are in the house are put into this soup, so no food goes to waste. Even though the history of this dish appears to dictate a pauperâ€™s meal, this is not always so. Eintopf is an exceptionally delicious and satisfying meal in itself. Rudi Lechners Restaurant is pleased to serve this hearty comforting stew. 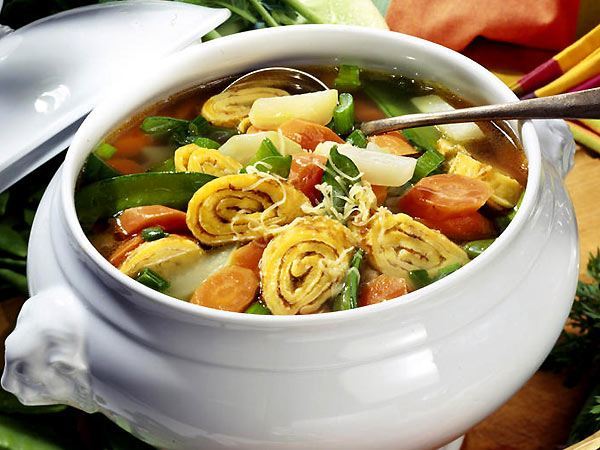 Â This dish has tradition and is one of the most popular stews from Germany. Eintopf was created during the times when people had a big family to feed but not a lot of money. When housewives didnâ€™t have much time to cook because of the chores they had to get done, whether it was laundry day or working in the fields during harvest time, they would make Eintopf since it is a fairly simple and time saving, yet filling dish to make. During the 1930â€™s Hitler insisted that Germans return to the basic meals of former days.

In fact, Hitler made it law in 1933 from October until March that one Sunday a month was Eintopfsonntag, one-pot Sunday. Donations were made to the poor from the money saved from not eating extravagantly. Donâ€™t let its history steer you away from enjoying this stew on a cold day. Rudi Lechners Restaurant prepares this simple but deliciously satisfying and soul warming stew in old world German tradition.

Most recipes for Eintopf have similar fundamental ingredients: a broth, vegetables, potatoes or pulses (legumes that are part of the food grain family and can include chickpeas, peas, lentils or any starchy legume, potatoes or even kohlrabi) and then some kind of sausage or meat (commonly pork, beef or chicken) and sometimes fish or lamb. The stew can vary from region to region but essentially has the same basic ingredients but adding that regions cuisine influences. Rudi Lechners Restaurant strives to make this stew delicious while keeping with the tradition of German style cuisine.

We invite you to come try our Rudi Lechner’s famous- Eintopf made in the traditional German way, as well as our other appetizing soups, entrees and desserts. Come join us at Rudi Lechners Restaurant and relish in the old world heritage atmosphere of our restaurant and leave the cooking to us.